Iran, as the fifth country in the field of crude oil production and the second largest gas producer in the world, is apt to the growth and development of the petrochemical industry, as the largest exporter of non-oil products, has a significant role in economic prosperity. In this respect, considering the sanctions of recent years on the export of crude oil and the situations of selling crude oil, it is important to pay attention to this industry as an effective factor in circumventing the sanctions as well as currency appreciation. In this study, the factors affecting the supply of urea exports to the export destinations of the UAE, Turkey, China and India in the period 2001-2009 are examined and analyzed. According to the studies, the factors that have affected the supply of Iranian urea exports can be referred to as GDP of target countries, real exchange rate, exchange rate fluctuations, trade liberalization, price exchange relationship, refinery raw materials prices and sanctions as livestock variables. . In this study, the real exchange rate volatility index was estimated using the GARCH model and then the supply model of Iranian urea exports was estimated by ARDL pattern. According to studies, the variables of GDP and trade liberalization have a significant positive effect on the supply of Iran exports in the short and long term, but other variables have a significant negative effect on the supply of Iran exports in the short and long term. 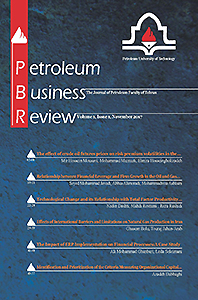